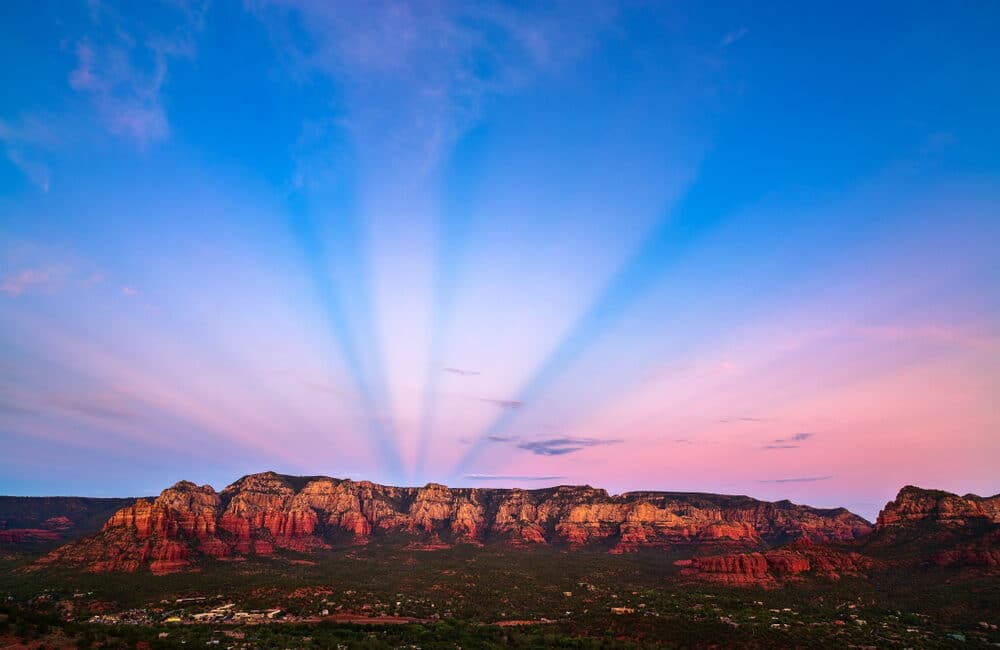 Experience the Healing Magic of Sedona Vortexes in the New Year

The Perfect Start to the New Year 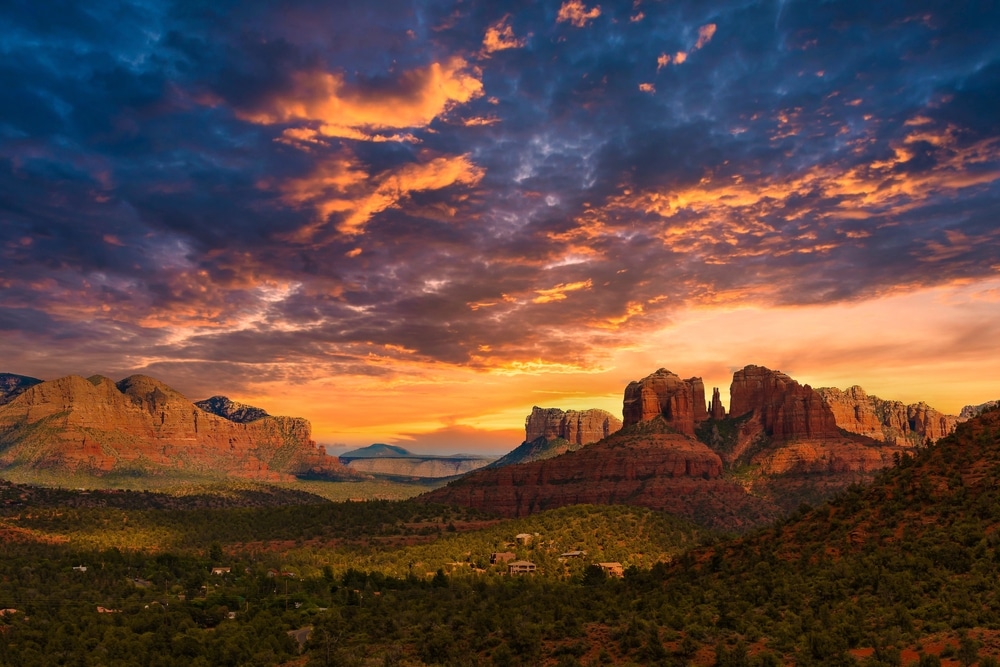 There’s no shortage of fantastic things to do in Sedona, no matter the time of year. From excellent hiking and biking in the stunning heart of Red Rock Country to wine tasting throughout the Verde Valley and leaning into the healing energy of the many vortexes in Sedona, there’s plenty to see, do, and experience during your next trip to Sedona.

This winter in Sedona is certainly no exception. Sedona is magically beautiful in the winter, actually, and it’s still a great time of year to enjoy things like hiking, wine tasting, shopping, and more. Winter in Sedona is also the perfect time to turn inwards and focus on wellness – an integral reason to visit the amazing vortexes in Sedona.

There are several spas and wellness centers in Sedona, but there’s another sometimes overlooked aspect to healing and wellness in Sedona: The healing energies at various vortexes in Sedona. With the busy holiday season and a New Year on the horizon, we can think of no better time to start planning a wellness journey to Sedona this winter.

There are several wellness spas and resorts around Sedona, but if you’re genuinely looking for the best places to stay in Sedona, you can’t beat one of our sensational Sedona Bed and Breakfasts, part of the Select Registry portfolio of properties.

Select Registry has been working with the finest lodging properties around the country for 50 years, always striving towards excellence in everything we do. Like us, the properties in our collection are dedicated to excellence. They have all passed the most rigorous inspection in the hospitality industry and tend to every detail of your stay, so the guest experience is second to none.

The lodging experience at a Select Registry Inn is infinitely more personal than a traditional resort or hotel, which is, at least in part, what sets our properties apart from the rest. If you’re genuinely looking for the best wellness-centered retreat while seeking healing energies from the vortexes in Sedona this winter, don’t miss your chance to book your stay with one of our Sedona, Arizona Bed and Breakfasts today!

If you’ve never heard of the vortexes of Sedona, let us introduce you to them and perhaps even inspire in you on a wellness journey for the New Year ahead! The Vortexes of Sedona, though impossible to see with the naked eye, are swirling energy centers. They are only found in certain parts of Sedona, most often in calm and tranquil places in the Red Rocks, and these vortexes in Sedona are said to be sacred healing centers of the earth.

It’s said that when you stand at one of the vortexes in Sedona, you can practically feel the energy moving through the ground – and thus through you – as if the earth itself is alive. Energetic forces are all around us, but these vortexes are purported to be exceptional in their properties and, over the years, have become a renowned destination for those on their own healing and wellness journeys.

Some people will tell you that the entire town of Sedona feels energetically charged – and it’s believed that the town itself is one big vortex-like mass of energy. However, there are a few places where the energies of these vortexes in Sedona are felt more strongly than others. These emissions of natural energy make the vortexes in Sedona prime spots for heightened spiritual awareness.

Don’t be surprised when visiting these vortexes in Sedona if you stumble upon people meditating, doing yoga, or engaging in other healing practices. These are all common practices – and we encourage you, at the very least, to sit and take a few deep breaths, absorbing the unique magic of these energies for yourself. Below, we’ve listed the top five vortexes in Sedona, though there are many more.

The Airport Mesa Vortex is one of the largest and most popular vortexes in Sedona – it’s also one of the most accessible. It’s reached via a short 3.3-mile loop hike to Sedona Airport Mesa – itself a gorgeous place to take in dramatic views of the red rocks. You can see Thunder Mountain and Chimney Rock, one of the best places to watch a sunset in Sedona.

Like all vortexes in Sedona, the Airport Mesa Vortex emits particular energy – this one is considered more masculine. The upward flow of energy from this vortex in Sedona makes those who visit it feel uplifted. It’s also thought that the Airport Mesa Vortex is a great place to go if you need clarity and to gain a new perspective on individual matters.

Given the relative popularity and accessibility of the Airport Mesa Vortex, winter is a wonderful time to make the trek here. There are far fewer people in Sedona and out on the trails during the winter, leaving you ample time for contemplation.

The vortex in front of Cathedral Rock is widely considered feminine energy and thus is the perfect place for those looking for compassion and wanting to slow down. The Cathedral Rock Vortex is the only major vortex in Sedona that is considered to harbor female energy, increasing its popularity.

Unlike the upward flow of energy at the Airpot Mesa Vortex, the energy here flows down into the earth, perfect for those seeking introspection and balance in their overly busy lives. The Cathedral Rock Vortex is considered the strongest in the area. 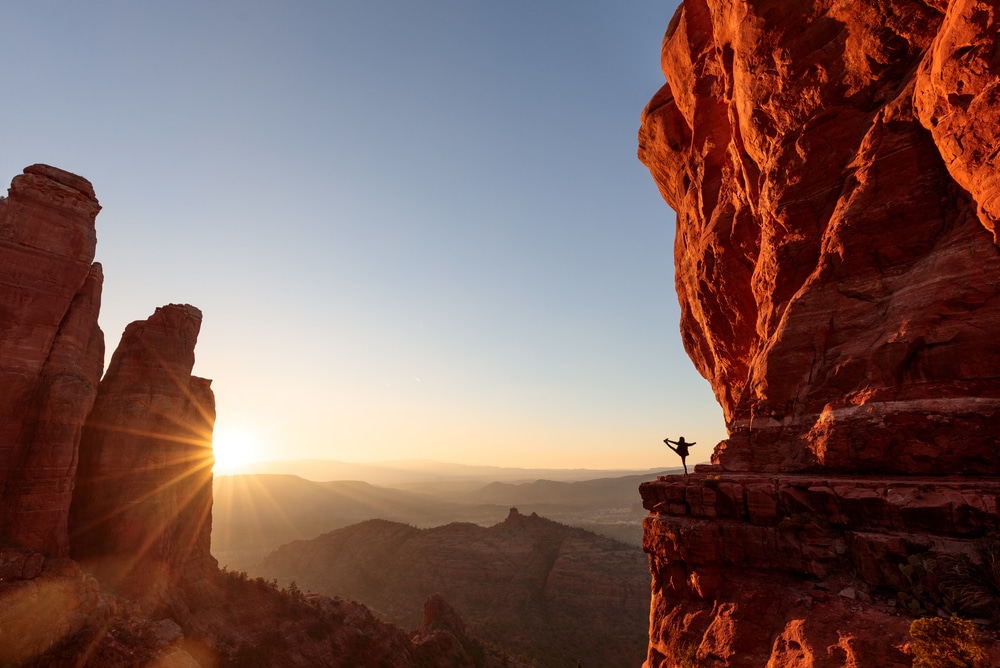 Like Cathedral Rock, Bell Rock is another highly sought-after hike in Sedona and one of the more powerful vortexes in Sedona. There are several hiking trails and routes to Bell Rock, but all will lead you to the same primary energy field.

Unlike what you may see while you’re there, it’s not necessary to climb to the top of Bell Rock to encounter this particular vortex – it’s the same (and safer) at the bottom of the rock.

The Bell Rock Vortex is an incredibly popular place for mediation, thanks to the upward-flowing energy that is thought to be good for gaining perspective and clarity on problem-solving. You can even find guided mediation trips out to Bell Rock  -just be sure to find someone with a valid permit from the Red Rock Ranger District.

Like all other vortexes in Sedona that we’ve listed, the Boynton Canyon Vortex is found in a very popular hiking area. This vortex is unique, though, as you’ll find both masculine and feminine energies here. It’s the perfect place to go when you’re seeking balance – and may therefore be precisely what you need as we start a New Year! The hike to the Boynton Canyon Vortex is one of the shortest, just over 0.5 miles from the parking area.

If you’d like to seek out even more energies from this area, you can head deeper into the canyon. There, you’ll find spots where other visitors have built energy circles and built rock cairns and where there have been other claims of energies at work. These are considered one of the seven vortexes of Sedona, but as we’ve already said, the entire area surrounding the town is thought to be one giant vortex full of energy.

Chapel of the Holy Cross Vortex

You can’t drive into Sedona without seeing the gorgeous Chapel of the Holy Cross, built into a hillside above Sedona. It’s a lovely spot to visit, and it also happens to be home to one more of the famous vortexes in Sedona.

Including the Chapel of the Holy Cross is sometimes controversial, as it’s not always considered one of the vortexes in Sedona. Still, it’s long been considered a destination for healing energies and spiritual powers, so we think it’s worthy of inclusion on our list – especially for those seeking wellness journeys in Sedona.

These vortexes in Sedona are fascinating and provide a great jumping-off point for any wellness journey in Sedona. Of course, there are also plenty of other spiritual wellness and healing centers in Sedona, including workshops, spas, retreat centers, other healing therapies, and so much more.

This winter truly is a great time to visit this storied destination – and we’d love nothing more than to be a partner in that journey. Look into our Arizona Bed and Breakfasts, and learn why we’re rated as the best places to stay in Sedona this winter.

Best Places to Stay in Sedona

Experience Red Rock Views from your bed, patio, or deck in 10 of our 11 Elegant Guestrooms. As a custom-built, classic Bed & Breakfast Inn, Canyon Villa Inn in Arizona is uniquely located and designed to capture the visual experience of Sedona’s world-famous Bell Rock & Courthouse Butte.

Sedona is the place for amazing adventures with back road jeep 4×4’ing, extensive, all levels hiking & biking, horseback riding, hot air balloon adventures, touring wine country, we have it all! Sedona is an ideal base from which you can center your entire adventure.

Among Sedona Bed and Breakfast Inns, Canyon Villa is a true value in premier Arizona lodging, offering modern yet classic B&B accommodations, a wonderful cuisine, a shimmering outdoor glass-tile pool,  gardens, private patios, and magnificent red rock views second to none. We look forward to sharing this “special space” in Sedona, Arizona, with you and the wonderful guests who gather here daily from all over the world. We hope to see you soon.

Welcome to one of Sedona, Arizona’s finest luxury inns! When planning a vacation to our beautiful city of Sedona, AZ, consider us first for your travel accommodations. Fill your days with the adventure and beauty only Sedona  can offer, then bask in luxury at our private villas and be pampered in our “Mansion Style” master suites.

Each guest accommodation includes a variety of premium luxury amenities including fireplaces, private patios, tubs for two, FREE WiFi in Villa and throughout the property, and much, much more.  Look no further than Adobe Grand Villas when looking for a Sedona Arizona Bed and Breakfast. 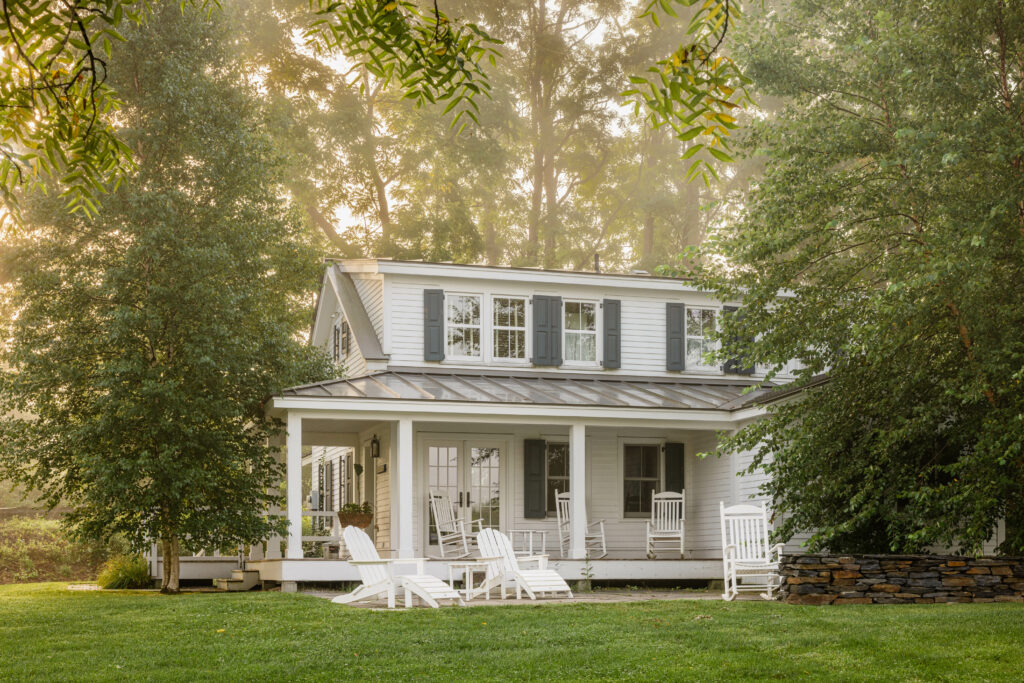