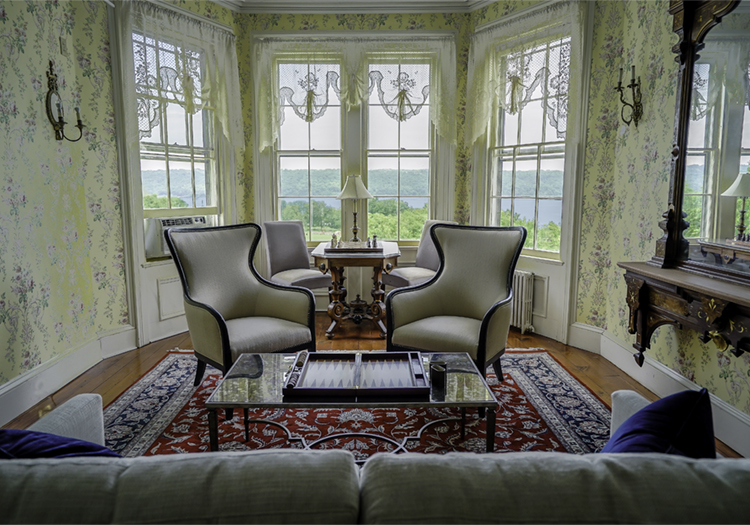 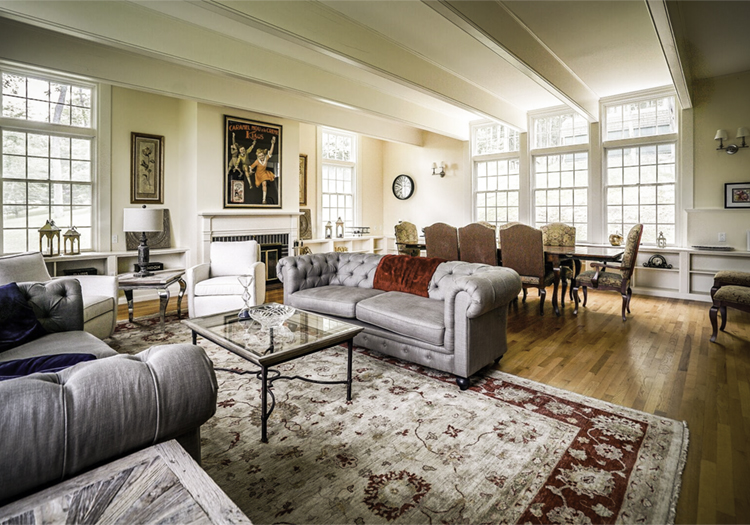 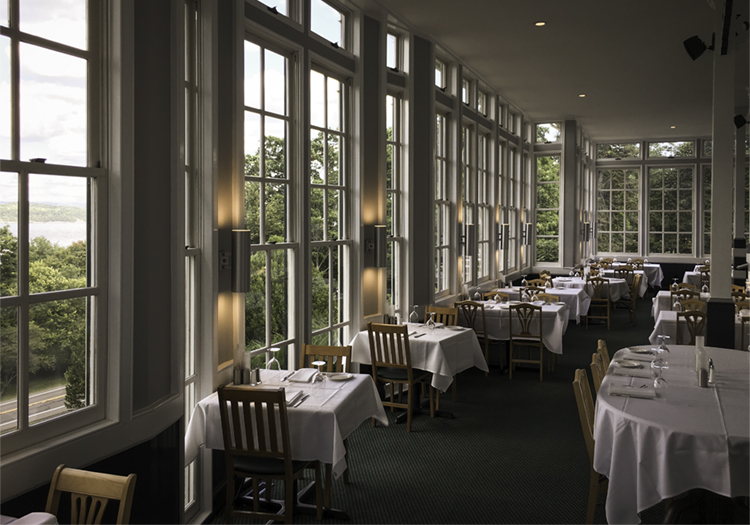 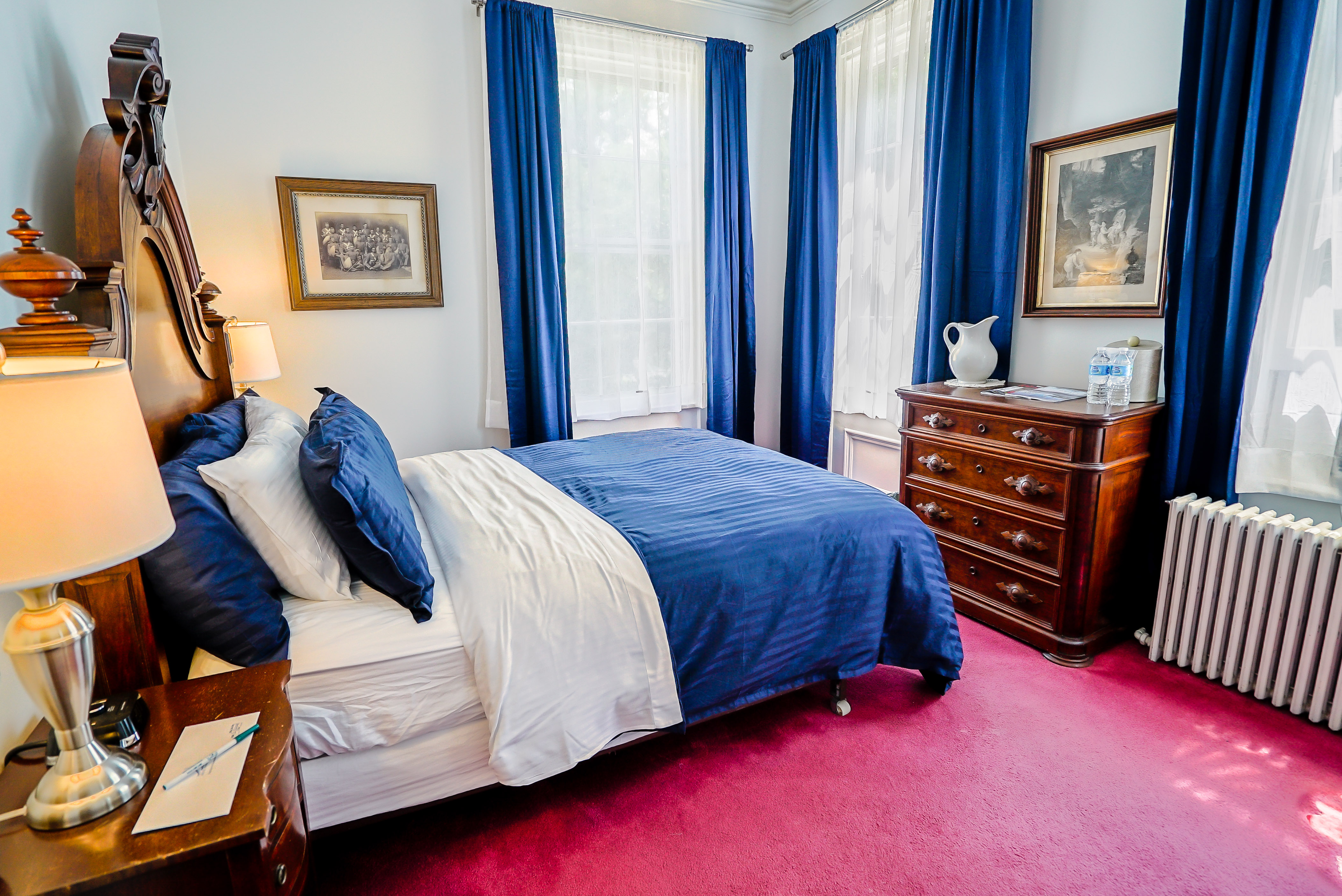 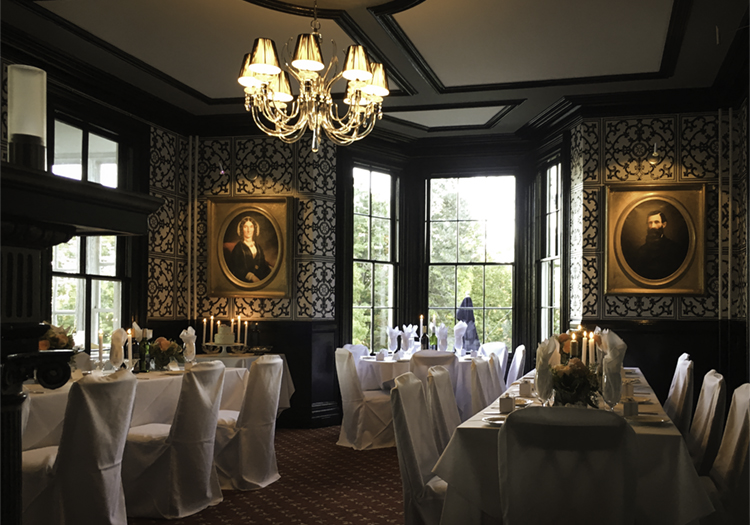 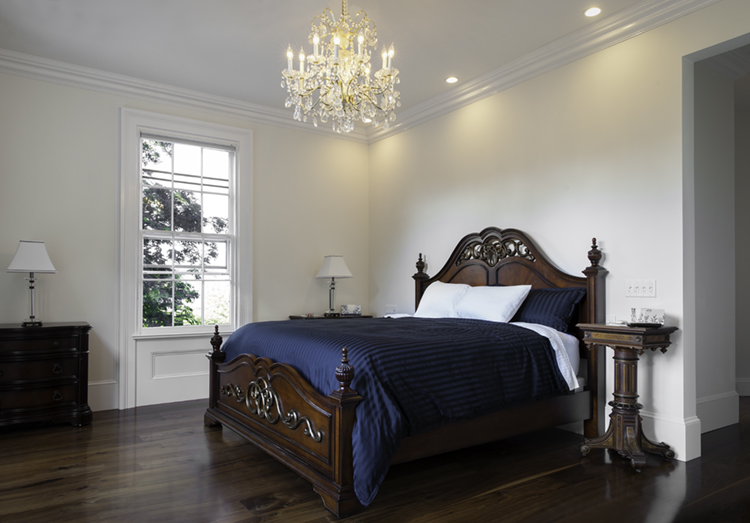 The Victorian home that is now the Inn at Taughannock was built in 1873 by Philadelphian John Jones as his personal country estate and makes up part of a 12-acre, 26 room inn located in the Fingers Lake area overlooking Cayuga Lake. During the 1930's Mr. Jones deeded the farm and most of his 600 acres to New York State for the creation of Taughannock Falls State Park (located across the street and surrounding the Inn). In the late 1930's, Molly, his widow, permitted rooms in the mansion to be rented out and a food service operation established. During the summers of 1940 and 1941, Mr. George Freeman oversaw the room and food service operations, but this was suspended during World War II. In 1945 Molly sold the mansion to Merrit and Maude Agard who began operating it as Taughannock Farms Inn. It has been in continuous operation as an inn since that time. In the fall of 1974, the Inn was purchased by the Agard's granddaughter Nancy (Agard) le Grand, who with her husband Keith, operated the Inn until 1996 when 1997 Susan and Tom Sheridan, purchased the Inn.

Most recently, in the Spring of 2016, the Inn was again purchased and has undergone extensive renovations to a number of the rooms/bathrooms, a trail was added that allows guests direct access to hike to the Taughannock Falls and there will be more work done to create new wedding/event space that will be completed Spring of 2020.

This wonderful, upstate New York inn is nestled on approximately 13 acres of land overlooking Cayuga Lake and Taughannock Falls State Park. Mr. Jones had a keen interest in horses and the current great oval lawn in the state park was the former site of his race track. Much of his personal furniture is still a part of the Inn today.

The Main Inn has six guest rooms (including the newly renovated Falls Suite) and a parlor on the second floor. All of these rooms have private baths and are furnished with antiques. The Parkview Guesthouse is next to the Inn and it has 3 well-appointed guest rooms with king-sized beds.  The Lakeview Guesthouse, directly across from the Inn on Gorge Road, can be rented out as either a one bedroom or two bedroom suite or as the whole house. The Hillside Guesthouse, which has been newly renovated, has 5 private ensuite rooms, which can be used as individual rooms or can be combined into 2, 3, 4 or 5 rooms (accomodating large parties/families).  Finally, the Edgewood Guesthouse, which has some of the most popular rooms in the Inn, features beautiful views of Cayuga Lake, 4 king units with jacuzzis and private balconies or patios.

The Inn is also available for special occasions such as weddings, rehearsal dinners, banquets, business meetings, and luncheons.

The view alone would be reason to enjoy an evening at the Inn at Taughannock for dinner, but when you add in the friendly service and amazing food, you will have an evening to remember.

Before dinner our guests can relax under the shade of our Catalpa tree or 135 year old Gingko tree while enjoying a cocktail or a glass of wine from the bar in our upper garden.

The enclosed tiered porch offers an exceptional view of the lake while the crisp linens and silver add to the romance.

Our dinner menu is a delight in American cuisine and offers plenty of choices to please anyone's palate. To complement dinner, the Inn offers an excellent wine list featuring many selections from the wineries of the Finger Lakes Region.

Breakfast for our houseguests is also served with a view!

Enjoy a wide variety of items such as fresh fruit, fresh baked pastries, homemade granola, and we always have a hot entree item that is sure to please.

Our restaurant is open for the season, starting in mid-April through Thanksgiving. The hours of operation are Friday and Saturday evenings, 5:00pm-9:00pm. Reservations are recommended. We offer a wonderful selection of classic American cuisine with a Mediterranean influence and our dining room offers a stunning views of Cayuga Lake. We always extend preferential treatment to our hotel guests in accommodating their requests, so please call us to make your dinner reservation. In December, the dining room is open only for private holiday parties. On New Year's Eve, the Inn is open to the public.

Restaurant on Premises: Open to the public

The Inn at Taughannock has a total of 23 guest rooms on the grounds to meet a variety of needs. Take a stroll back in time with the six guest rooms in the Main Inn. These rooms are all decorated with beautiful antiques and with the exception of the Falls Suite, have no televisions so there are no distractions on your special night. If your idea of romance includes more ammenities you might enjoy a room in one of our three guesthouses. For many people a king/jacuzzi room in the Edgewood is just what they are looking for. With a beautiful view of Cayuga Lake and either a private patio or balcony, a king size bed, TV, coffee maker, refridgerator, microwave and a jacuzzi with a view. No matter which room you chose you will always have the most important basic ammenities such as a private bath, telephone, and most importantly a plush pillow top mattress for the perfect nights sleep.

The beautiful surroundings of the Inn make any occasion special, but when you add in a wedding dress, magic happens!

Let our lush gardens and greenery or the Taughannock Falls (just a short drive) be the perfect backdrop for your wedding pictures.

Each wedding at Taughannock Farms Inn is as unique as the couple celebrating.
Whether you are looking for a casual gathering or an elegant affair we will make your day special. We are available to take parties of 20 to 150 which makes us the perfect spot for rehearsal dinners too.

Location! Location! Location! With only a short drive out of Ithaca you will feel like you are in a different world. With the surroundings and relaxed atmosphere your business guests will feel pampered, allowing their creativity to flow. We offer a variety of different meal and snack options we can customize the day to meet your needs.