Have you ever dreamt of being on TV or in a movie? There’s something thrilling about the limelight. While most people only dream about their 15 seconds of fame, a small few actually get it! Many Select Registry bed and breakfasts, inns, and small boutique hotels are among the lucky few that have landed a spot on screen. If you’d like to stay somewhere that’s soaked up some limelight, consider planning a trip to one of these famous places!

Here’s 6 famous places you’ve seen on TV or in a movie.

1. Walk on the floors from Dirty Dancing.

Where: The Esmeralda Inn & Restaurant in Chimney Rock, North Carolina

No one can forget the last steamy dance scene in the massive box office hit, Dirty Dancing! It’s the climax of the movie and that famous scene where Patrick Swayze picks up Jennifer Grey while The Time of My Life plays in the background.

Dirty Dancing was filmed in Lake Lure, North Carolina. After filming wrapped, the floor built for the last scene’s set was donated to the Esmeralda Inn! Today, you can find it in the inn’s lobby! 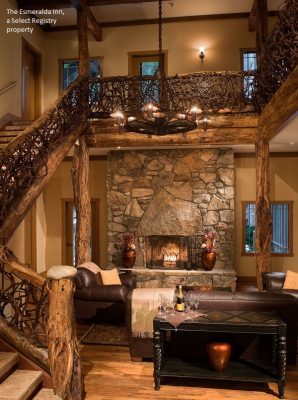 2. Travel Through History On The Discovery Channel. 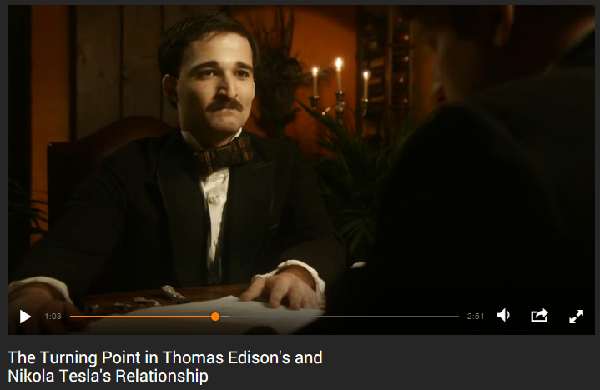 Where: The Antrim 1844 Country House Hotel in Taneytown, Maryland

The Discovery Channel brought the story of how Thomas Edison’s relationship with Nikola Tesla turned sour to the Antrim 1844 Country House Hotel. The episode was filmed as part of American Titans, a popular series that details the major events in the lives of American’s greatest men: Rockefeller, Carnegie, Edison, Tesla, Hearst, and Pulitzer!

The story is set in 1884, which makes the hotel the perfect setting because it was also built in the 1800s. Much of the original outbuildings of the home are still intact today! Places on the property like the Carriage House, the Ice house, the Post House, the Summer Kitchen, the Brick Kitchen, the Overseer’s Wing, and a few other buildings date back to its beginning.

If you skip to 50 seconds into the video, you can see the hotel’s award-winning wine cellar! 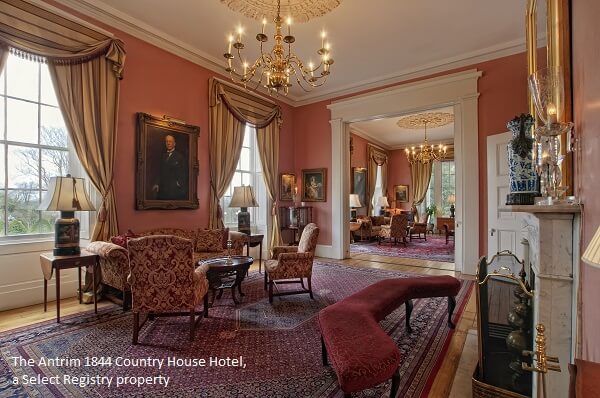 The Antrim 1844 was also used in another American Titans episode: Differences Arise Between Rockefeller and Scott. All in all, filming took two full days. During that time, producers transformed some of the hotel’s fondest places like its formal gardens, drawing rooms, restaurant, and wine cellar into the backdrop for some of the most important moments in American history!

3. Feel Right At Home On HGTV. 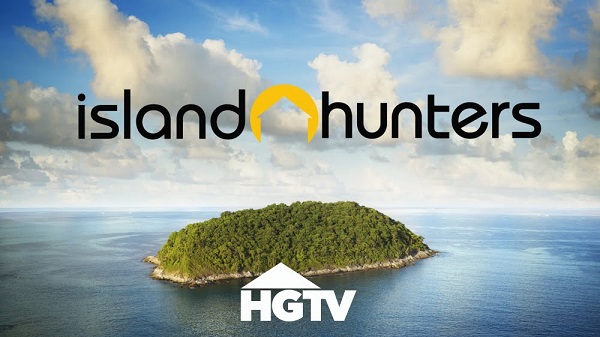 Where: The Lodge on Little St. Simons Island in Georgia

In the ninth episode of season one, newlyweds Rachel and Jeff are dreaming of an anniversary vacation on a private island. The couple lives in Boston, Massachusetts, so anything down south is ideal. Their search for a quiet beach getaway led them to the Lodge on Little St. Simons Island!

Over the course of three days, the episode was filmed. Despite minor inconveniences of shooting, the project was well worth the time and effort it took. HGTV still airs the episode from time to time and the Lodge on Little St. Simons Island still receives inquiries and reservations from the exposure! 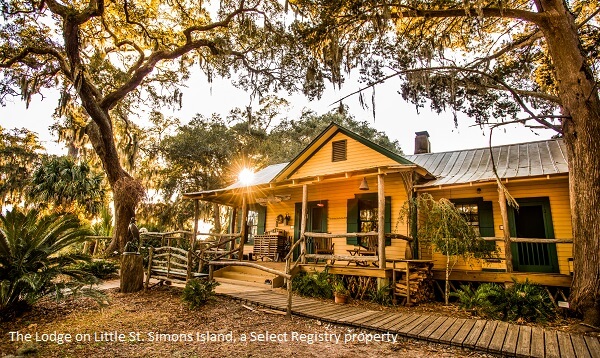 Guests staying during filming were intrigued by the project. However, the filming was done strategically so as not to bother anyone! Privacy is what the lodge is all about. Upon arrival, guests are whisked away by a private boat to reach the island and no more than 32 overnight guests are allowed at one time. Little St. Simons Island also has 7 miles of private beaches and 10,000 acres of undeveloped wilderness for exploration and relaxation!

4. See What It’s Like To Run A Savannah B&B On Georgia Traveler. 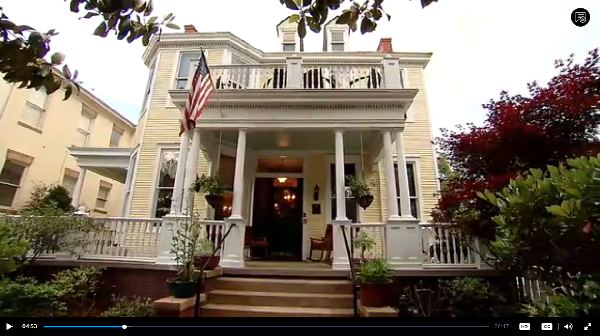 Where: The Azalea Inn and Villas in Savannah, Georgia

Running a top-notch bed and breakfast is no easy feat! Reporter Christine Van Blockland from Georgia Traveler found this out firsthand when she spent a day assisting with the operations at Savannah’s jewel, the Azalea Inn and Villas.

The request to film came after owner Teresa Jacobson impressed another reporter with her wit during an interview for another show! At the time, she boldly requested they feature her bed and breakfast and her wish was later granted. Filming for the segment was an all day affair, which meant both Jacobson and head chef Shannon were extra busy exceeding their guests’ expectations and hosting a small camera crew. 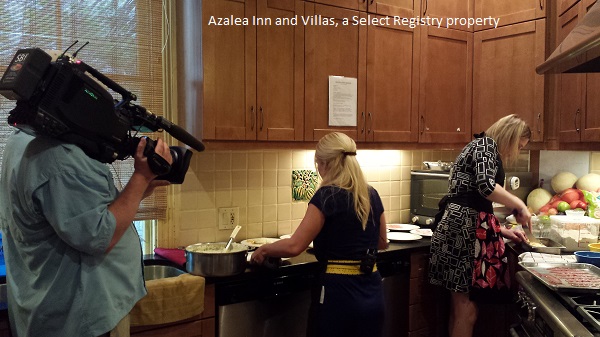 The day began at 5:00 am, with Blockland helping Jacobson and Shannon prepare and serve breakfast. After breakfast, it was time to head to Jacobson’s office to answer phone calls and go over her highly organized calendar! Next stop was housekeeping, where Blockland received a few lessons from Miss Betty, the head housekeeper. A true Savannah character, Miss Betty is the B&B’s very own “box of chocolates” because you never know what you’re going to get.

If you’re interested in starting a bed and breakfast, this segment is a realistic portrayal of the amount of organization, hard work, and dedication required to craft a truly charming and personalized experience for your guests!

Where: The Wolf Cove Inn in Poland, Maine

Featured on the WGME Daybreak Road Trippin’ segment shortly after it opened, the Wolf Cove Inn lives up to the segment’s name, The Perfect Maine Lakeside B&B. With spectacular views, the inn offers guests a way to connect to the natural surroundings. Inside, you’ll find reflections of nature along with all of the makings of a home away from home!

This was the first time the inn had ever been featured on TV! Its current owners, Sue and Roy Forsberg, bought the property in December of 2013 and began a 5-month renovation project. The Wolf Cove Inn celebrated its grand reopening on May 15, 2015. Several days later, filming took place on May 22nd! 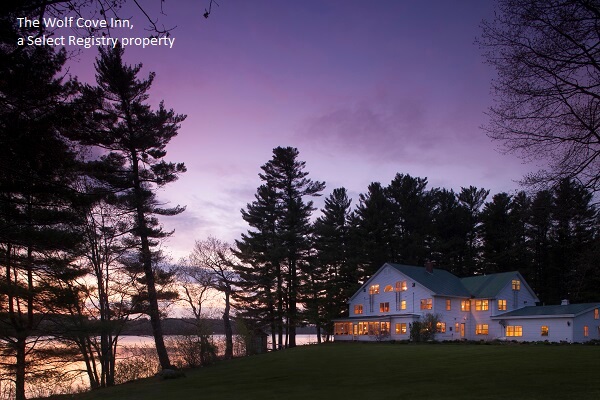 The two crew members, Dave Edes and the cameraman, were able to complete filming in half a day. The guy you see on camera is Edes, who is the journalist for the Road Trippin’ segment of the WGME Daybreak show and the station’s sportscaster! Considering the natural beauty of the inn coupled with its homey feel and luxurious amenities, it’s no surprise the Wolf Cove Inn earned a spot on the segment.

Have you seen any of these famous places on TV or in the movies? Which one do you want to visit first? 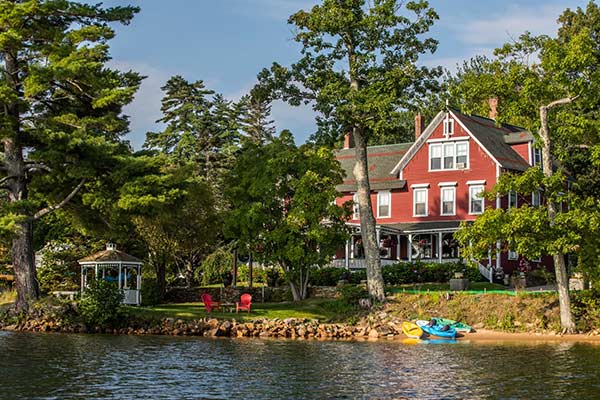 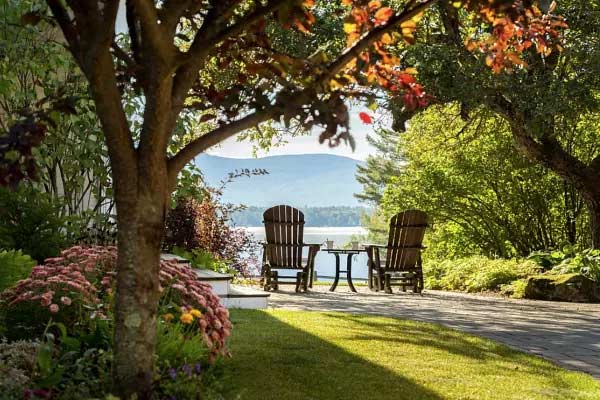