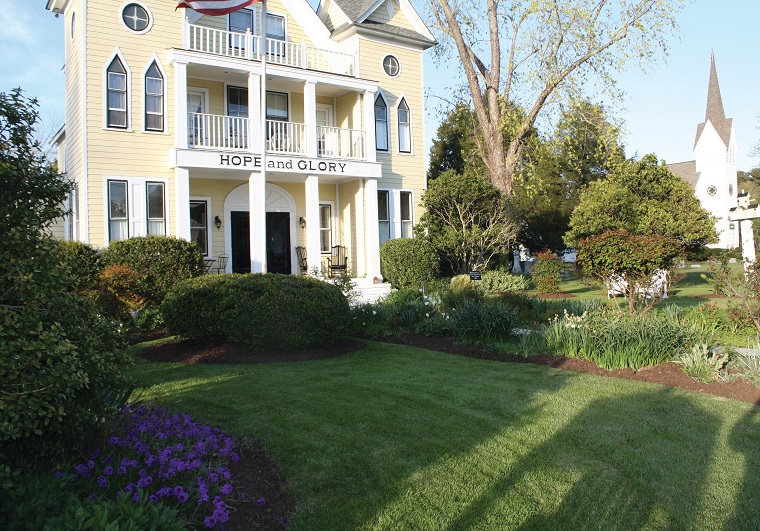 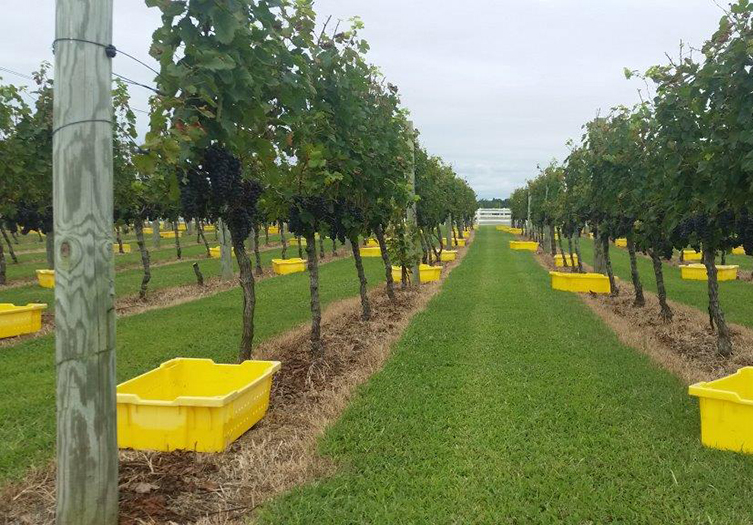 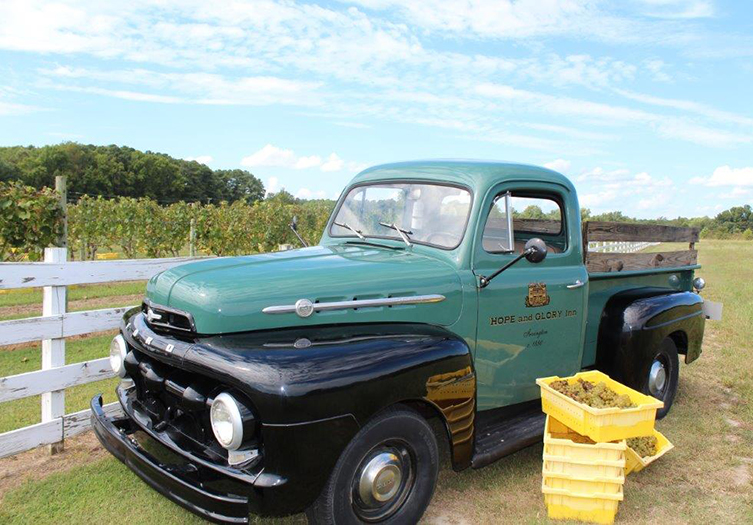 The Hope and Glory is a historic (1890) schoolhouse that has graduated into a mega-stylish boutique hotel in Virginia with six schoolhouse rooms and six charming garden cottages. There are also a Carpenter Gothic vineyard cottage called a "tent" (modeled after Oak Bluffs on Martha’s Vineyard). They can be found a bike ride away within our vineyard, The Dog and Oyster. A few of this inn’s amenities include an outdoor garden bath, elegant fine dining and a bar, a small but classy spa, a downeast boat with captain for cruises, a meetings facility, and a hip pool. It is situated within the chic Chesapeake Bay waterfront town of Irvington which the Washington Post described as “tiny but tony”. It is indeed a place where "Mayberry meets Manhattan".

RANKINGS
"100 of the World’s Most Romantic Hotels, Inns and Places" by romanticplaces.com.
This website is "unabashedly in love with artistic, talented one-of-kind owners". They seek "stunning settings, good food and an authentic sense of place. A creative owner's quirky and stylish imprint was prized. Small was beautiful."
We were also named by askmen.com as one of their "Top 10 Bed and Breakfasts/Inns in the US". This is most unique because we thought we were the quintessential romantic place for women. We have certainly made an impression if the other gender feels the very same way.
Also, Virginia Living has named the Hope and Glory as one of Virginia's "13 Lavish Hotels and Inns". "Walking into the Hope and Glory...I knew I landed in heaven."
Travel + Leisure named us as one of their "30 Great Inns in the U.S." and said that "if you are extravagantly romantic, you’ll love this eccentric spot on Virginia’s Chesapeake Bay shore"
USA Today and CNN – named the Hope and Glory as one of their "10 Great Places to Rent a Cottage".

PRESS
Ruminations on our Romance:
The New York Times in a full page article on the Hope and Glory Inn in its Sunday Travel section reported the inn "likes to advertise itself as one of the most romantic in the county. That seems hard to quarrel with; yet, it really does not do it justice".
Coastal Living Magazine called it "whimsical, extravagantly romantic… and guaranteed to make you smile". It was one of their "Top Ten Coastal Inns in the US".
Southern Living named it one of its four "Favorite Romantic Getaways".
Washington Flyer described the Hope and Glory as "A Sanctuary for laughing souls;…" "reflects life’s amusing twists and manages to create nothing short of magic"
Mary Engelbreit Living describes our rooms as "dreamy cocoons that make guests feel cherished"

Restaurant on Premises: Open to the public

Pub/Tavern on Premises: Open to the public

Handicap Accessible: Not handicap accessible due to historic nature of property

Innkeeper's Pets: Outside Only

The Hope and Glory Inn takes great pride in providing brides and grooms with one of the most romantic places in America to be married. You will be convinced of this once you have reviewed our rankings, what is said by the press and travel guides, and who has selected us as one of their pick of the finest hotels in the world.If you are planning to get married, we suggest you consider the Hope and Glory Inn before choosing a site for your ceremony, rehearsal dinner, reception or honeymoon.

Let’s begin with this online review by one of our guests just this year.

My wife and I (and dozens of family and friends) just spent a weekend at the Hope and Glory Inn for a wedding. Being a Presbyterian minister, I have officiated at more destination weddings than I can remember. Driving down to Irvington to officiate at this one, I figured it would be just like so many locations before it. WOW...WAS I WRONG!! The Hope and Glory Inn under the hands-on direction of its owners Peggy and Dudley, was the most welcoming and wonderful location I've ever seen for a wedding and reception. The Inn is immaculate and "top drawer" at every turn. The grounds are amazing and fun. The can-do, personable air of the owners and staff made for a weekend that we will never forget! After the wedding ceremony in a nearby vineyard, we all partied into the night on the Hope and Glory Inn grounds. The food was unique and terrific! The amazing day ended with the couple getting into the back of a vintage Hope and Glory Inn pickup truck and with us holding long sparklers, they rode off to their new life together. On the way home, my wife and I both agreed that the reception was the classiest and best conceptualized we had ever attended(next to the one of our son of course!). No place is perfect, but on this side of heaven...the Hope and Glory Inn comes really close!

We could not have said any better.

Let us fulfill your dreams for a truly magical wedding. With gorgeous English gardens, nineteen fabulous guest rooms, a chef, our own exclusive floral designer and officiant on staff, Hope and Glory Inn is "the perfect place for any couple to start their new life together." We offer several sites for smaller weddings with larger wedding events being held in our romantic vineyard.

Small to large, beautifully simple to extravagantly elegant, leave everything to us. At Hope and Glory, we host no more than six wedding celebrations per year. This allows us to truly focus on a very select few and insure that they are exact reflections of the bride and grooms desires..."over the top" experiences like no other.

The Pattesons and the entire Hope and Glory family are eager to welcome you to their magical inn and town, and are committed to providing the ultimate wedding experience. Here, you will experience only happiness on your wedding day; we will ensure that you enjoy every moment of this most special day of your life.

Visit today and see why we are perennially recommended for weddings by Virginia Living; and, USA Today calls The Hope and Glory Inn, "the perfect place to start or continue a tradition with your family."

The Hope and Glory Inn hosts corporate meetings, retreats and other business gatherings in its multi-purposeful meeting facility and lounge called the Library, which overlooks our enchanting pool. The Library is a fully-renovated small meeting space of 520 sq ft accommodating up to 35. There is an eleven foot vaulted ceiling, flexible table arrangements and adjacent kitchen and rest room.The Library offers a choice of leather furniture suite arranged in front of a fireplace; or, standard conference arrangements within a modern theater with wireless technology, a 70 inch TV monitor, 5.1 surround sound. The Hope and Glory has been the location of retreats for such Fortune 500 companies as BB&T Bank, The Kellogg Foundation, Leo Burnett, Pfizer Corporation, Proctor and Gamble and Phillip Morris.

We are "the hotel of choice" because we are an inn that offers the best of hospitality to the companies who choose us. They select us because we are not a conventional property offering the same standardized service offered by most everyone else. We provide everything they do; yet, we do it with panache and close personal attention.

Meetings are made seamless and simple.

Internet connections with the world from most anywhere on our property.
A chef who makes the simplest request a delightful dish; and, whose direct involvement creates an unforgettable and unmatchable culinary experience.
A meeting space and cloistered property that creates the every best of “out of the box thinking”.
The compactness of accommodations, dining and meeting space creates the bonding and loyalty every company seeks.
Owners who are committed to being directly involved which is most assuring in this world of passed down responsibility.
The VIP commitment – the treatment for every guest – everyone is special. 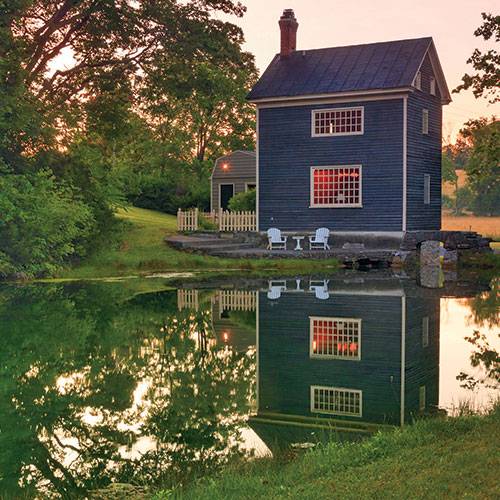